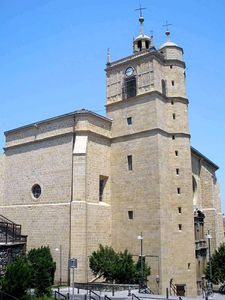 The church of Our Lady of the Juncal, in Irún (Province of Guipúzcoa, Spain) is a building of remarkable and relatively simple volume, since it shows the interior plan and its unified space, highlighting the uniqueness of the tower, on the one hand, and the lower volumes of the annexed dependencies, on the other, among which is the sacristy. All the bodies, except the tower, are protected by an inclined skirt cover, with the ridge parallel to the main axis and resolution to several waters adapted to the plant.

The church, although designed and built in the Renaissance period, responds to Gothic patterns, its construction system and its forms, which are still valid in much of Europe, especially the north, with references to Renaissance ways (columns, choir, windows and oculi), and baroque (cover).

All buildings, especially churches, may contain elements that are not strictly architectural, of a more or less mobile nature, but associated with architecture; These include sculptures, altarpieces, furniture and paintings.

In the church of Santa María del Juncal it is worth mentioning the main altarpiece, a work conceived in 1643 and whose authors were Bernabé Cordero, in its architectural part, and Juan de Bazcardo, in the sculpture. It consists of two bodies on bench and an attic with Calvary; large columns of narrow shaft, composed and Corinthian orders, limit the encasements and separate the three central streets and the extreme groins. In the bank are scenes of the Passion and in the rest the life of the Virgin. The jewel of the altarpiece is the reproduction of the Andra Mari, whose original is the twelfth century.

The iron spikes and the weather vane date from 1606.