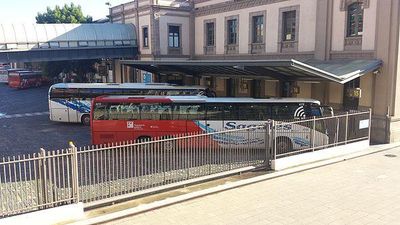 The Estació del Nord or Estación del Norte, is a former main line railway station in the city of Barcelona, Catalonia, Spain. Originally opened in 1862, it was closed as a railway station in 1972. It is now used partly as a bus station, partly as a large multi-purpose sports hall, and partly as a police station. The sports hall is known as the Poliesportiu Estació del Nord, and was a 1992 Summer Olympics venue. The bus station is known as the Estació d'Autobusos Barcelona Nord, and is Barcelona's principal terminal for scheduled medium and long distance coach services.
The station lies in the Fort Pienc neighbourhood of the Eixample district of Barcelona, some 1.3 kilometres from Plaça de Catalunya. The Arc de Triomf station, served by Barcelona Metro line L1 and Rodalies de Catalunya suburban trains, has an entrance directly in front of the station on Plaça d'André Malraux. The Parc de l'Estació del Nord, laid out on the site of sidings associated with the station, lies to the south-east.