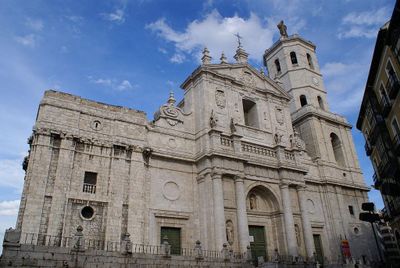 The Cathedral of Our Lady of the Holy Assumption (Spanish: Catedral de Nuestra Señora de la Asunción), better known as Valladolid Cathedral, is a Roman Catholic church in Valladolid, Spain. The main layout was designed by Juan de Herrera in a Renaissance-style.

The original design for this cathedral would have created a church which would have been the largest cathedral in Europe. Initially planned as the Cathedral for the capital city of Spain, ultimately, only 40-45% of the intended project was completed, due to lack of resources after the court moved towards Madrid, and the expenses caused by the difficult foundations of the temple, located in an area with a large gap in the field.

The structure has its origins in a late Gothic collegiate church, which begun in the late 15th century. Before temporarily becoming capital of a united Spain, Valladolid was not a bishopric, and thus it lacked a cathedral. However, with the newly established episcopal see in the 16th century, the Town Council decided to build a larger, modern cathedral in Renaissance-style, befitting the city's new status.

The cathedral that was planned would have been immense. When construction started, Valladolid was the de facto capital of Spain, housing king Philip II and his court. However, due to strategic and geopolitical reasons, by the 1560s the capital was moved to Madrid and construction funds were largely cut. Thus the cathedral was not finished according to Herrera's design, and further modified during the 17th and 18th centuries, such as the addition to the top of the main façade, a work by Churriguera.