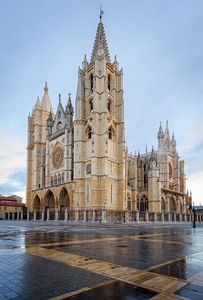 Santa María de León Cathedral, also called The House of Light or the Pulchra Leonina is situated in the city of León in north-western Spain. It was built on the site of previous Roman baths of the 2nd century which, 800 years later, king Ordoño II converted into a palace. Almost all of it built between 1205 - 1301, the north tower and cloister were built in 14th-century, and the south tower completd in 1472.

The León Cathedral, dedicated to Santa María de la Regla, was declared of Cultural Interest in 1844. It is known as the Pulchra Leonina and is a masterpiece of the Gothic style of the mid-13th century. The design is attributed to the architect Enrique. By the mid 15th century it was virtually completed.

The main façade has two towers. The southern tower is known as the 'clock tower'. The Renaissance retrochoir contains alabaster sculptures by Jusquin, Copin of Holland and Juan de Malinas. Particularly noteworthy is the Plateresque iron grillwork screen or reja in the wall behind the sepulchre of King Ordoño.

It has three portals decorated with sculptures situated in the pointed arches between the two towers. The central section has a large rose window. Particularly outstanding is the image of the Virgen Blanca and the Locus Appellatione, where justice was imparted.

The church has nearly 1,800 square meters of stained glass windows. The great majority of them date from the thirteenth to the fifteenth century: a rarity among medieval gothic churches.

In the Main Chapel, there is an altarpiece by Nicolás Francés (15th century) and a silver urn containing the relics of San Froilán, the town's patron saint, made by Enrique de Arfe. The 13th- to 15th-century cloister contains sculpted details in the capitals, friezes and ledges.

The Cathedral Museum houses a large collection of sacred art. There are almost 1,500 pieces, including 50 Romanesque sculptures of the Virgin, dating from pre-historic times to the 18th century (Neoclassicism) with works by Juan de Juni, Gregorio Fernández, Mateo Cerezo, a triptych of the School of Antwerp, a Mozarabic bible and numerous codices. The first manuscript in Leonese language, the Nodicia de Kesos, can be found in its archives.

The Leon cathedral is also one of the three most important cathedrals, along with that of Burgos and Santiago de Compostela, on The Way of Saint James (or in Spanish, El Camino de Santiago).