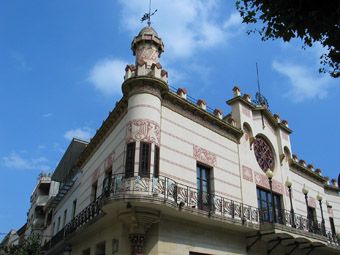 One of the first architectural commissions of Lluís Domènech i Montaner was the Ateneu, built between 1884 and 1885. The building, which was raised on a former house, has been the headquarters for several cultural and political associations. It is now the library thanks to a complete restoration between 1991 and 1999. It is a building of moderate lines with wrought iron railings, a large number of red colour sgraffito and a large rose window with stained glass in the centre. Particularly noteworthy is the outer corner with the dome and the wrought iron dragon lightning conductor.