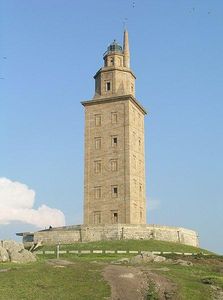 The Tower of Hercules is an ancient Roman lighthouse on a peninsula about 2.4 km from the centre of A Coruña, Galicia, in north-western Spain. Until the 20th century, it was known as the "Farum Brigantium". The Latin word farum is derived from the Greek Φάρος Pharos for the Lighthouse of Alexandria. The structure stands 55 metres tall and overlooks the North Atlantic coast of Spain. It was built in the 2nd century and renovated in 1791, and is the oldest lighthouse in use today.

There is a sculpture garden featuring works by Pablo Serrano and Francisco Leiro. The Tower of Hercules is a National Monument of Spain, and has been a UNESCO World Heritage Site since 27 June 2009. It is the second-tallest lighthouse in Spain, after the Faro de Chipiona.