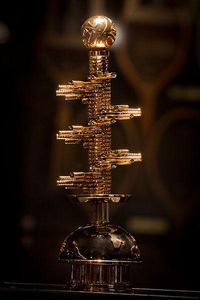 The Madrid Open , currently sponsored by Mutua Madrileña and known as the Mutua Madrid Open, is a joint men's and women's professional tennis tournament, held in Madrid, during early May. The clay court event is classified as an ATP World Tour Masters 1000 on the Association of Tennis Professionals tour and a Premier Mandatory event on the Women's Tennis Association tour. In the past it has also been known as the Madrid Masters. The tournament is traditionally played on a red clay surface. The event was played on blue courts in the 2012 tournament edition, with the ATP deciding against blue thereafter.
Ion Țiriac, a Romanian former ATP pro and now billionaire businessman, has been the owner of the tournament since 2009. According to a Romanian publication which interviewed Țiriac in 2019, the tournament brings to the city of Madrid annual benefits exceeding €107 million.