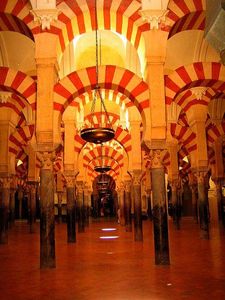 The Mosque–Cathedral of Córdoba , officially known by its ecclesiastical name, the Cathedral of Our Lady of the Assumption is the cathedral of the Roman Catholic Diocese of Córdoba dedicated to the Assumption of Mary and located in the Spanish region of Andalusia. Due to its status as a former Islamic mosque, it is also known as the Great Mosque of Córdoba , or the Mezquita.
According to traditional accounts, a Visigothic church, the Catholic Christian Basilica of Saint Vincent of Saragossa, originally stood on the site of the current Mosque-Cathedral. The Great Mosque was constructed on the orders of Abd ar-Rahman I in 785 CE, when Córdoba was the capital of the Muslim-controlled region of Al-Andalus. It was expanded multiple times afterwards under Abd ar-Rahman's successors up to the late 10th century. Among the most notable additions, Abd ar-Rahman III added a minaret and his son Al-Hakam II added a richly-decorated new mihrab and maqsura section . The mosque was converted to a cathedral in 1236 when Córdoba was captured by the Christian forces of Castile during the Reconquista. The structure itself underwent only minor modifications until a major building project in the 16th century inserted a new Renaissance cathedral nave and transept into the center of the building. The former minaret, which had been converted to a bell tower, was also significantly remodelled around this time. Starting in the 19th century, modern restorations have in turn led to the recovery and study of some of the building's Islamic-era elements. Today, the building continues to serve as the city's cathedral and Mass is celebrated therein daily.