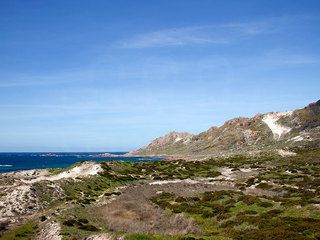 The municipality of Camariñas is named after a native shrub, the caramiña (Corema album). It was also called the "hunger herb" because during the Civil War food was scarce and people ate its fruit to stave off hunger. It is now a protected species! The caramiña can measure up to 1 m in height, and has many twigs and tiny three-petalled female flowers. Male flowers do not have petals. In August, bittersweet fruits appear. They are white or purple when unripe and pink when ripe. At the base of the largest climbing dune in all of northwestern Spain, at Trece beach, you will find Galicia's largest reserve of caramiñas, an endangered species. Precisely, Camariñas' most untouched area lies between the beaches of Trece and the climbing dune of Monte Branco, one of Europe's largest. It is very important to take care and preserve this native and extremely sensitive to human activities, plant. Do not go there, you can see them from far away!