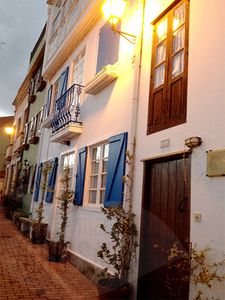 Although much of Sada's activity focuses on its port area, the real heart of the town, continues being its fishermen's districts.
Opposite the fishing port is the Fontán district that still retains the traditional 18th century fishermen's houses.
From Avenida do Porto, following the wooden steps, you will reach the entrance to the district. It is an area of narrow streets that also guide you towards Fontán Fort (18th century).
You will find the best viewpoints of the port at the top, where you can imagine how ancient sailors watched the bay from their homes. Although many houses have been renovated, they still keep their original spirit. They are small two storey spaces whose austere designs contrast with the brightness of their façades. The slight modernist influence on the houses should be noted, which incorporate geometric and floral motifs in small reliefs on their façades.
Although Fontán is recognised by its colouring, originally most of the walls were painted white and it was only joinery of the frames and balconies which was tinged with colour, which reportedly was from surplus paint from the boats.
Follow the steps and simply enjoy!Discover the historic districts of Sada in this video