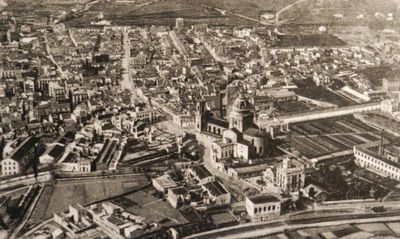 Content:
The first written reference of Sant Andreu de Palomar is from the late 10th century. Between the 11th and 13th centuries, the first nucleus of houses was established around the church. The limits of the old village ranged from the river Besòs to the Collserola mountain range and from Montcada i Reixac in the north to Sant Martí de Provençals in the south. Sant Andreu de Palomar was a predominantly agricultural town until well into the 20th century, although in the late 19th century industries began to be installed there. Both activities were highly dependent on easy access to water, which Sant Andreu had in abundance thanks to the Rec Comtal. In 1853, there were 11 textile factories, in 1861 there were 24 and in 1902, there were 150 factories altogether: chemical, food and metal industries; tanneries; building, energy and transport industries and a gasworks. On 20 April, 1897, the queen of Spain signed the Aggregation Decree which forcibly annexed Sant Andreu de Palomar and many other towns in the Barcelona plain. The town became the 9th District with the passing of subsequent amendments. During the Civil War, the neighborhood of Sant Andreu de Palomar changed its name to Harmonia de Palomar (Harmony of Palomar).
Sant Andreu's industrial past has left its mark on the streets. You reach Plaça de Can Fabra from C/Fàbrica (Factory Street). Passeig de Fabra i Puig takes its name from brothers Ferran and Roman Fabra i Puig, directors of Fabra i Coats (Fernando was also the mayor of Barcelona). Perpendicular to this, there are C/Camil Fabra and C/Filatures (Spinning St). Camil Fabra, Ferran and Roman Fabra i Puig's father, was mayor of Barcelona and in his will he left an inheritance to the Royal Academy of Sciences and Arts of Barcelona to built an observatory on the Tibidabo, named the Fabra Observatory, which was inaugurated in 1904. Around the Parc de la Maquinista you can find C/Ferran Junoy dedicated to one of the directors of La Maquinista Terrestre y Marítima, and C/La Barcelonesa, which was the first name of the factory. In the neighbourhood you can also find streets with names of relevant scientists, such as the square dedicated to Mateu Josep Orfila i Rotger, physician and chemist from Menorca, founder of toxicology, the street in honour of Francesc Santponç i Roca, an eminent Catalan physician and inventor during the 18th-19th centuries, and a street dedicated to Pietro Angelo Secchi, an Italian Jesuit astronomer of the 19th century.