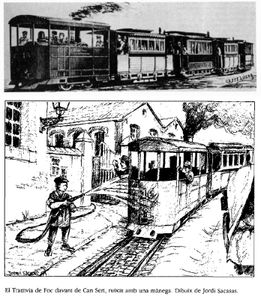 Introduction:
In 1870, Aleix Soujol, a metallurgical industrialist, projected a tram network to join Barcelona with other towns in the Barcelona plain. In 1872 he was granted permission to build a horse's tram line that would link Barcelona and Sant Andreu de Palomar. Shortly after, the tram which went to Sant Andreu became the first steam tram of the city.

Content:
Across Europe steam trams were beginning to be built, so Aleix Soujol asked for a new license to establish the first intercity Catalan steam tram. This change of technology was not viewed favorably by Sant Andreu people, who complained that the roads were too close to the houses. It must be added that there was a transport service of horse-drawn carts offering the same service.
However, the Fire Tram, so called because it ran on steam, entered into service on 20 December, 1877. It circulated from just outside the current Arc de Triomf to the corner between C/Gran de Sant Andreu and Torrent de Parellada; in total, it was a journey of 4.6 km. The tram did not enter further into the village because of the existence of two streams. The wagons could accommodate thirty people seated comfortably. Repair shops and garages were located in the former factory Can Balcells (where the Sant Andreu Civic Centre is today). In February, 1879, it was authorized to establish two-way trips, for coming and going. In 1883, la Maquinista Terrestre y Marítima built the first steam engines, which were built for this tram. On 1 September, 1902, the Fire Tram was replaced by electric trams.