Spiritism in Barcelona: the Plaza Real 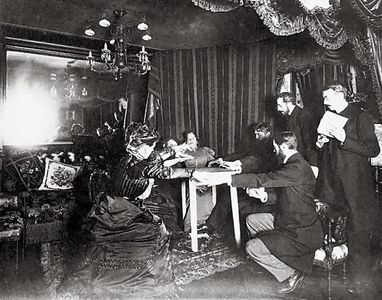 Source: Spiritist session with the famous medium Eusapia Palladino in the house of the well-known populariz

Introduction:
Spiritism, understood as the doctrine developed by Kardec, arrived to Barcelona in the early 1860s. From then until the Spanish Civil War, with the exception of the dictatorship of Primo de Rivera, Spiritism was a very popular doctrine especially among the working classes, as it was used as an alternative to the prevailing Catholicism. Hundreds of spiritist centers were established in the city, magazines and books were published, acts of charity were organized... Spiritism was also associated with other movements concerned with fighting against the established order, such as feminism, secular education and naturism. For these reasons, Spiritism presented itself as an instrument capable of changing the social order by changing the spiritual order.

Content:
It all began in 1861 when the French publisher and bookseller Maurcie Lachârte, who lived in exile in Barcelona for publishing works related to utopian socialism, brought Kardec's books, which were being very successful in Paris, to his bookstore at the Plaza Real, number 1. When Lachârte commissioned a large party of spiritist books and magazines, the Archbishop of Barcelona, Antoni Palau i Termes, decided to confiscate them and open an investigation process against the spiritist doctrine. On September 9 of that year, the books were sentenced to be burned at the stake in the Esplanada de la Ciutadella. It was as if a serial offender had been convicted, the event was marked by a great solemnity: a crowd gathers to witness the spectacle, three young boys carry the 300 volumes in boxes. A priest, with a torch in one hand and a cross in the other, approaches the pile of books. A clerk records everything that happens in the Auto-de-fe. The priest reads the sentence and, once finished, brings his torch to the pile of books. Gradually a murmur grows among the public: Why were these books burned? What did they say? What frightened the church so much? By the end of the act the scene had almost transformed into an anticlerical riot. It is probable that the Church achieved the opposite of their intended effect, following with the Auto-de-fe: the popularity of Spiritism in Barcelona did nothing but grow. The legend says that the Archbishop, who died the following year, appeared to a group of local spiritists apologizing for his action and ensuring that the space where the books burned, the Ciutadella, would soon become attractive gardens, as indeed came to pass years later. In that period, the figure of the notary José María Fernández de Colavida is key, as he would become the first translator of Kardec's books into Spanish.