A poet with spirits problems: The Palau Moja 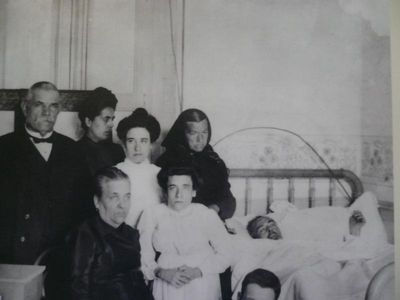 Source: Jacint Verdaguer in bed with his sister, his assistant Terrades, Ramon Miralles and his wife, Juana

Introduction:
The famous Catalan poet Mossèn Cinto Verdaguer (1845-1902) lived in this Palau Moja as the private priest of the Marqués (Marquis) de Comillas family, owner of the building. One day he was visited by a peculiar priest named Joaquín Pinyol. Pinyol told Mossèn that while performing an exorcism, the devil had revealed that only Verdaguer could remove him from the body of the young possessed girl. Pinyol brought Mossèn to Mirallers Street, where the so-called "Casa d'Oració" (House of Prayer) was located. There, Verdaguer performed a first exorcism that cost him more than suffering. The spirits of the devil, as we shall see, were not so different from those of Spiritism.

Content:
After his first visit to the "Casa d'Oració", Verdaguer attended several exorcism sessions there. These were usually on the border with Spiritism. The difference between a possessed person and a person acting as a medium with spirits was diffuse and the same person could be considered possessed by the devil by the priests of the "Casa", and, at the same time, as a medium for spiritists. Thus, the Church tried to confront Spiritism with their own weapons. For this reason, when the news of the activities of Verdaguer at the "Casa d'Oració" arrived to the church authorities and the Marquis de Comillas, they urged him to abandon them. Verdaguer did not, and not only that, but he also apparently began seeing the family of the mysterious widow Duran, who he had met in a session. Given his reluctance to stop performing exorcisms, the Church began a smear campaign against Verdaguer who, it was said, "has strange behavior, has gone mad", and the worst indictment of all, "has become a spiritist". Years after his arrival in Barcelona, Spiritism had been growing especially in working class towns and neighborhoods such as Gracia, Sants, Raval, the Poble Nou, and Sabadell and Terrassa. The Church took the opportunity to attack its spiritual opponent. Public opinion was filled with opinions for and against Verdaguer, which became known as the "Verdaguer case". Such was the echo that even the spiritists themselves stood up in defense of the Mossèn, claiming that he had never followed their doctrine. Verdaguer was first expelled from the Palau Moja by its owner, then exiled to the Plana of Vic and finally suspended a divins, which forbade him to participate in Mass. After a series of articles in the press, which Verdaguer called "En Defensa pròpia (in self-defense)" and a trip to Madrid, the ban was lifted and Verdaguer was ironically assigned as parish priest of the Betlem church, just in front of the Palau Moja. As Verdaguer himself noted: "so much suffering to cross from one side of Las Ramblas to the other".