Comas i Solà and the spirit of Leonor: The Royal Academy of Sciences and Arts 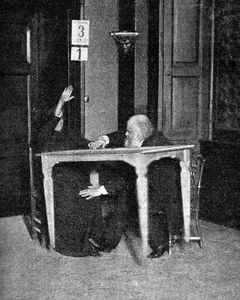 Introduction:
In the spring of 1907, the famous and prestigious Catalan astronomer Josep Comas i Solà was invited to investigate the curious phenomenon of the materialization of a spirit. Comas Solà devised a series of conditions and steps to study Spiritism as if it were a laboratory experiment. The medium and its defenders, however, found that some of the astronomer's constraints prevented concentration and, therefore, the final realization of phenomena. Comas Solà was for years a member of the Royal Academy of Sciences and Arts of Barcelona.

Content:
Josep Comas i Solà has been one of the most renowned twentieth-century Catalan astronomers. He was the first director of the Fabra Observatory, which depended on the Royal Academy of Sciences and Arts, he discovered planets and stars and was especially known for his astronomy popularization efforts and for his sympathy with the workers' movements. In 1907, Comas was invited to study the medium Carmen Dominguez, who performed the materialization of a spirit. Apparently, Dominguez, dressed all in black, hid in a room next to where those attending the seance were seated in the dark. Shortly after, a spirit appeared dressed all in white who was called Leonor. Comas was to subject the medium to certain tests, such as, for example, sewing a series of sashes around her waists to attach her to the chair. That time, however, Leonor did not appear, but the spiritists argued that such mechanisms affect the activity of the medium, who could not exercise her powers. There was a problem of authority involved: who had it, the scientist or the spiritist? But there were also problems of social criteria, honor and decency involved. The same Comas said he could get up in the middle of the session, turn on lights and expose the spirit, but he did not out of respect for the medium and her spiritist peers. After the experience, Comas published a series of articles in which the phenomena was categorized into three groups: true, doubtful and false. Comas said that some bumps and light effects that happened during the session could be true, that the marks observed in the hands and feet of the medium were questionable, but the appearance of Leonor, and the possibility of contact with spirits in general, was false. Comas' conclusion was clear: "Spiritism, as it is conceived, can in no way be accepted by science".