A spiritist Clinic and the sick medium 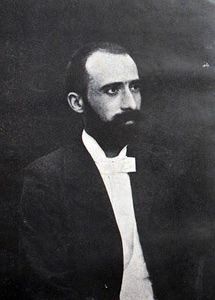 Introduction:
On this street in the humble and working-class Raval neighborhood, near the Hospital de la Santa Creu, the main Barcelona Hospital until the early twentieth century, there was situated for 10 years, from 1895 to 1905, the so-called Hydro-Magnetic Clinic, located in the same place where the spiritist publication "Journal of Psychological Studies" was published. This unorthodox clinic was funded by groups of spiritists who exercised charity as one of their main activities. There, the doctor Victor Melcior applied new healing techniques through hypnosis.

Content:
In the Hydro-Magnetic Clinic, funded by spiritist groups, patients were welcomed free. The two doctors who worked there were not paid, attending, during 4 hours, around 20 patients a day. While Melcior used hypnosis, another doctor, José Cembrano, used magnetic techniques. Melcior's hypnosis became very popular after a particular case of a patient who came shortly after opening the clinic. It was a woman who had been partially paraplegic after a hysterical crisis. Melcior used hypnotic suggestion and, after just one session, the woman left the clinic walking perfectly. Although the same Melcior said that healing in one session was not normal, the recovery of this patient resulted in Melcior gaining much popularity. At that time, hypnosis was a technique that, although it was used therapeutically especially among the upper classes, was not well received by the scientific community. At one point even the police raided the clinic looking for illegal medical practices, but could not close it because both Cembrano and Melcior were medical graduates. This clinic served the spiritists as a place to exercise charity, which was part of their doctrine, as a place to promote scientific knowledge, and finally as a place of propaganda, since those attending the clinic were in a space where lectures on Spiritism were made, there was a library and even sessions were provided with mediums.
Finally, it is interesting to note the vision Melcior had of spiritism because, despite working in this clinic, Melcior did not always accepted the existence of spirits and often said that people who were mediums were people with a psychological illness. Melcior said spiritistic phenomena "can not be produced by a healthy person, but a sick subject, with some psychological problem" and he related these diseases with the poor social and working conditions of the working classes.