The Palacio Nacional and the solutions to climbing Montjuïc 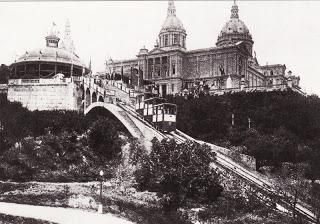 Source: Small cable car carrying visitors to the Exhibition at the height of the National Palace.

Introduction:
Close to the Cartographic Institute, we can find a mysterious arch cement which is the remains of a small funicular, as we can see in the photo, which took visitors to the National Palace, the central building of the 1929 Fair, now the National Museum of Art of Catalonia.

Content:
This small funicular, which traveled a distance of about 100 meters, including a vertical drop of 30 meters, was not the only funicular constructed for the International Exhibition. The Montjuïc funicular ran a similar route, and continues to this day: from Parallel to Miramar avenue. This funicular traversed a much longer route, almost a kilometer, including an 80 meters drop, and reached up to 16 km/h. It was advertised at the time as the fastest in the world! Regarding the National Palace, it was designed from the very beginning by Puig i Cadafalch as the central building and emblem of the Exhibition. The project was finalised by Eugeni Cendoya and Enric Catà, who designed a classic, bombastic building in the purest "noucentista" style. The building hosted one of the most important exhibitions of the event, with the title of "Art in Spain". In the oval room, which can still be visited today, the opening of the International Exhibition, chaired by Alfonso XIII seconded by General Miguel Primo de Rivera, took place. Near the National Palace, on top of Montjuïc, the pavilions of private companies used the Exhibition to advertise themselves. Two good examples that stood out for their spectacular towers were the Asland Tower and the Tower Jorba. Asland was a cement company that built a tower made, of course, of concrete, which was 50 meters high. The Tower Jorba was a kind of Eiffel tower formed by the letters of Jorba. It was also 50 meters and cars passed below it! Both were dismantled after the Exhibition.