"El Poble Espanyol", the stadium and what the exhibition wanted to hide

RouteYou » Rutes científiques de Barcelona » Places of interest » "El Poble Espanyol", the stadium and what the exhibition wanted to hide 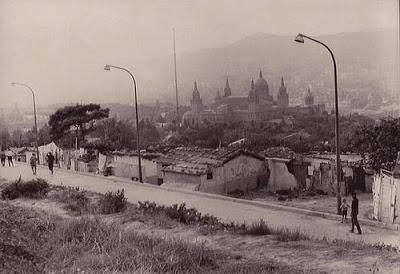 Source: The Can Valero shanty town in the 60s with the National Palace in the background.

Introduction:
The "Poble Espanyol", which synthesized traditional Spanish architecture, and the imposing Stadium, were key parts of the Exposition of 1929, which had as sections Spanish Art and sports. These grand spaces will help us to speak of a hidden Montjuïc history: that of the self-constructed workers' neighborhoods.

Content:
The "Poble Espanyol" is the brainchild of Puig i Cadafalch which aimed to represent up to 600 buildings of traditional architecture of the different parts of Spain. It was carried out by the architects Francesc Folguera and Ramon Reventós, with the help of the art critic Miquel Utrillo and the painter Xavier Nogués, which traveled through the peninsula choosing the buildings. Initially it had the name of Iberona but finally the "Poble Espanyol" was finally choosen, becoming one of the most successful attractions during the Exhibition. For that reason it was saved once the Exposition ended, whereas the initial idea had been to destroy it. The space currently occupied by the "Poble Espanyol" car park, was once the Chemistry Palace by Antoni Sardà. It displayed all kinds of national and international chemicals. Later, this Palace became the Orphea cinema studios, where the first Catalan-language film was shot: "El Café de la Marina" (Domingo Pruna, 1933). Besides tourists, the "Pueblo Espanyol" also has a darker past: it served as a prison camp during the Spanish Civil War. Similarly, the Montjuïc transformation for the Exhibition and the subsequent use of the mountain also has its dark side that, until recently, has been hidden by history. Since the late nineteenth century, with the construction of the Eixample and the Universal Exhibition of 1888, many workers which came from other parts of Catalonia and Spain began to live in shanty towns on the slopes of Montjuïc, where the stone extraction quarries for these constructions were located. By 1914, up to 5,000 of these shantys were counted only in Montjuïc, where entire neighborhoods appeared. The Exhibition of 1929 put an end to some of these shantys, but others were hidden behind walls that prevented the distinguished foreign visitor to see the real conditions of the life of the working class. After the Exhibition, this phenomenon not only continued but worsened, especially with the hardships of the post-Civil War era. Some of the pavilions and exhibition buildings became makeshift homes for people trying to survive in the city. A good example was the Stadium, built as a key part of the sports section of the Exhibition. It was the second largest in Europe at the time, and it welcomed refugees from other parts of Spain during the Civil War, and also housed a large number shantys later on, whose memory is just now starting to be recovered.