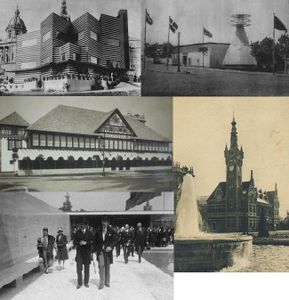 Source: From left to right and from top to bottom: the Pavilion of the Serbian, Croatian and Slovenian King

Introduction:
Coming down from the columns, to the left we find the so-called Mies van der Rohe Pavilion, originally intended as the German Pavilion, the gem of the Foreign Section of the International Exhibition of 1929. The coincidence of this Exhibition in Barcelona with Exhibition Iberoamericana in Seville resulted in none of the American countries being represented. In Barcelona there were basically pavilions from various European countries.

Content:
The German Pavilion for the Barcelona Exhibition has been considered one of Ludwig Mies Van der Rohe's masterpieces. This is a very good example of modern architecture, a paradigm of what architecture in the second half of the twentieth century would become, and a strong contrast to the buildings made by local architects, like the National Palace, in a completely classic style. It is a rectangular building, set on a podium of travertine, with little decoration, both outside, where we can only find some small ponds and the sculpture "Morning" by Georg Kolbe; and inside, where van der Rohe had the collaboration of his partner, the interior designer Lily Reich. Together they also developed a chair design called the Barcelona Chair. The Pavilion was demolished after the event but, in 1985, was rebuilt from the original plans. Other interesting foreign pavilions were, for instance, the Romania Pavillion, which reproduced a typical Transylvanian house and after the war was used to hold Republican prisioners before being destroyed; the Belgium Pavilion, which reproduced a palace of Malines, and, before being demolished in the 60s, served as housing for slum dwellers of Montjuïc; the Pavilion of Sweden, an avant-garde work by Peder Clason with a wooden tower, which was used as fuel during the cold winters of the Civil War and the postwar era. This Pavilion was rebuilt in Berga where it served as a school and was demolished in the 60s, to be rebuilt again in 2001 as the Berguedà Archive. The Pavilion of the Serbian, Croatian and Slovenian Kingdoms was also very vanguandist: it was a star-shaped, black and white striped bulding, next to the National Palace, and was demolished after the Exhibition. During the Exhibition, Barcelona received a visit from the German Graff Zeppelin, an impressive airship, the largest in history, 236 meters long, which went flying over Barcelona for an hour in the afternoon and a little longer on the night of the 16th of March, 1929. The arrival of the airship was an event in the city: people came out to greet it. During the night, the lights of a German ship anchored in the harbor and those of the National Palace lit the Zeppelin. After a stint in Barcelona, the Graff Zeppelin completed the first round-the-world tour in a dirigible. However, before the Second War, and after an accident in the United States with a similar Zeppelin, these devices were mostly dismantled.