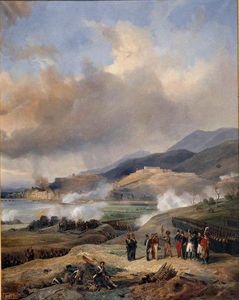 The Siege of Tortosa pitted an Imperial French army under General Louis Gabriel Suchet against the Spanish defenders of Tortosa led by General Lilli, Conde de Alacha. The siege progressed swiftly and Alacha surrendered on 2 January 1811. Tortosa is a city that lies on the Ebro River about 80 kilometres southwest of Tarragona. The action took place during the Peninsular War, part of the Napoleonic Wars.

Colonel Rouelle was employed at the siege of Tortosa, where he defeated two sorties by the besieged on the December 24 and December 28, 1810. These two feats were mentioned in dispatches.