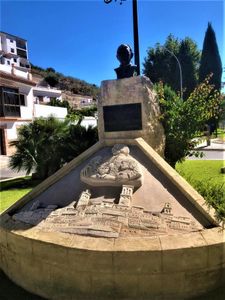 This bronze bust was erected in June 1993 and commemorates the figure of Juan Candil Ríos , pastor of Santa María de la Asunción at the end of the 20th century. A priest who came from l'Espera left his mark on the city.

He was a warlike priest , one of those who were not satisfied with preaching the Word of God, but who also wanted bread on the table for those who would hear them. He is remembered here because he fought for the inhabitants of Arcos who lived in caves . This is his most famous work, but he did much more as he fought against the misery that suffocated his believers.

He fought the misery that suffocated his believers, but with God's request and with a hammer. At the same time, he is also remembered for his great devotion to Holy Week . It was the week when he was happiest, when he lived the most. He had a strong religious component and contributed every detail that made him stand out in everything related to the basilica and its history. Not only because he was the pastor, but also because he was the most interested.

He was a simple man, a little shy, enemy of great deeds, but stubborn when he saw injustice . For this reason, the inhabitants of Arcos remember him with great affection for his many works.