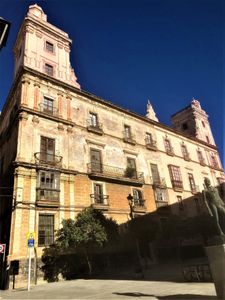 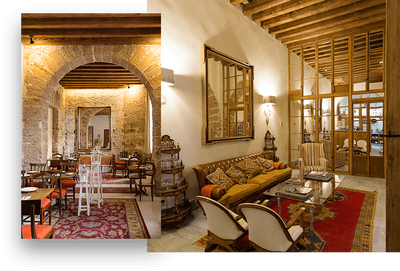 It is a building in Cádiz neoclassical style, a heterodox style typical and characteristic of Cádiz, where rigor, symmetry and decorative elements are complemented by the occasional use of late Baroque decoration, so common in Andalusia.

The house is closed off with the peculiar Cadiz watchtowers on the four corners. City ordinance prohibited homes with more than one watchtower . The owner had four independent houses built in the same building.

The majesty of the towers contrasts with the austerity of the facades . While the lavish towers indicated the social position and wealth of the owner, the austere interior gave the room full functionality and respectability as a place of residence. It really seems that Questionla built the House of Four Towers as his company's headquarters.

It was a house to live in, with many rooms long rented to people staying in town awaiting the departure of their ships for America (a use of "hotel" now recovered after the Restoration), but it was also a house for working, making trades, or storing supplies.

It is now a hotel, having been in ruins and restored late last century.