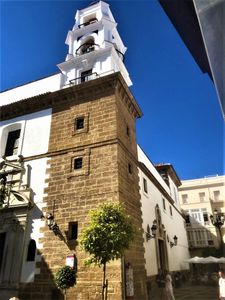 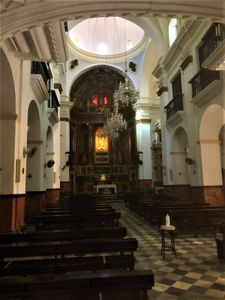 The Church of Sant Agustí, formerly a convent, was almost completely renovated in the 18th century.

The church has three naves and on the side walls are chapels responsible for the founders, including some well-known merchant families from Cadiz. It is covered with a barrel vault in the nave and a vaulted ceiling in the side aisles, on columns with Tuscan pilasters and a dome on shells in the transept.

The facade is in late Mannerist mid-17th century marble . The cloister consists of four arcades with Tuscan marble columns; The two upper parts have openings with lintels. The altarpiece in the main chapel is in neoclassical style, in marble, by Pedro Angel de Albizu.

The reforms carried out in the Neoclassical period combine altarpieces of this style with those of the Baroque style. This church has a rich artistic heritage, including the Cristo de la Humildad y Paciencia attributed to Roldana and the Cristo de la Buena Muerte attributed by some to Martínez Montañés and by others to Alonso Cano.