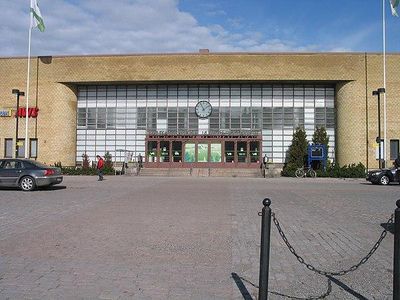 Turku Central Station is a railway station in the VII District of Turku, Finland. It has VR services to Helsinki and towards Joensuu . The station serves approximately a million passengers annually.
The railway station was opened in 1876, together with the newly built railway between Turku and Tampere, in a celebration attended by the future Tsar Alexander III of Russia. Services were at first only to Tampere and Toijala, and the significance of railways was rather minor. In 1899, a new railway to Helsinki was opened, and subsequently rail traffic to and from Turku became more frequent.