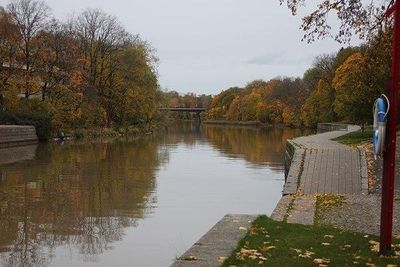 The Aura is a river in south-western Finland. Its sources are in the town of Oripää, and it flows through Pöytyä, Aura and Lieto before discharging into the Archipelago Sea in the middle of the city of Turku. The waters of the Aura river are brown. The total length of the river is about 70 kilometres , and it contains eleven rapids, the biggest of which is Nautelankoski at Lieto. The reserve tap water for Turku Region is drawn from the Aura, the city's secondary waterworks being situated by the Halinen rapids.

The word "Aura" appears to come from an archaic Swedish word for waterway , but in Finnish it translates as "plough," a name the river lives up to. Situated in an agricultural zone, it is made turbid by surface runoff from nearby farms with eutrophication as the biggest threat. Its condition has been improving since the 1970s and the Aura river is now clean enough to support salmon.