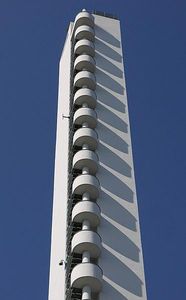 The Helsinki Olympic Stadium , located in the Töölö district about 2.3 kilometres from the centre of the Finnish capital Helsinki, is the largest stadium in the country, nowadays mainly used for hosting sports events and big concerts. The stadium is best known for being the centre of activities in the 1952 Summer Olympics. During those games, it hosted athletics, equestrian show jumping, and the football finals.