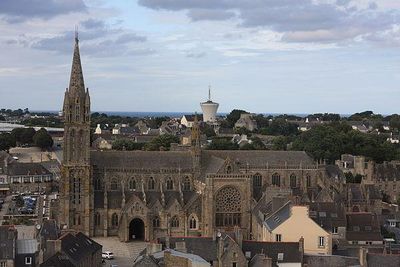 Saint-Pol-de-Léon is a commune in the Finistère department in Brittany in north-western France, located on the coast.
It is noted for its 13th-century cathedral on the site of the original founded by Saint Paul Aurelian in the 6th century. It has kept a unique architecture, such as Notre-Dame du Kreisker Chapel, an 80 m high chapel, which is the highest in Brittany. It was also the scene of a battle during the Breton War of Succession, where the Montfortists and their English allies defeated an army led by Charles of Blois.