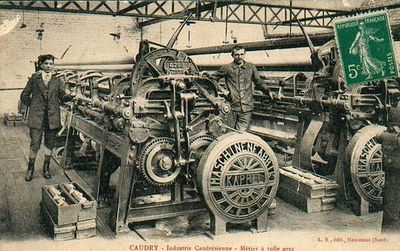 Caudry is a commune in the Nord department in northern France. Its inhabitants are called the 'Caudrésiens'. The city is mostly known as the Capital City of French Lace and is considered a landmark of French sartorial heritage and high craftsmanship for its art of weaving the finest and most precious fabrics through its centuries-old textile industry. The city is a lead supplier for luxury fashion houses such as Chanel or Gucci. The city also supplies brands such as Yves Saint Laurent, Dolce & Gabbana, La Perla, Alexander McQueen or Ralph Lauren. In recent history, among the most internationally publicized creations made out of Caudry’s lace were Catherine, Duchess of Cambridge’s wedding gown worn while marrying Prince William, Duke of Cambridge in Westminster Abbey on 29 April 2011 or Amal Clooney’s wedding dress worn in September 2014 in Venice, Italy while marrying American actor George Clooney. Numerous artists and politicians such as Lady Gaga, Beyonce or Michelle Obama have worn Caudry's lace.
The city of Caudry has not always carried its current name. However, this last derives from the previous appellations of the city: