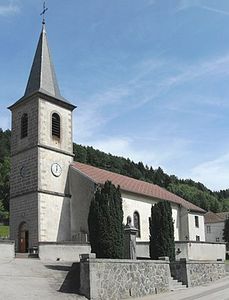 Basse-sur-le-Rupt is a commune in the Vosges department in Grand Est in northeastern France. Its inhabitants are called Bassurois. It is a mountainous commune of seven hamlets, crossed by the river Rupt. Its landmarks include Le Haut du Roc, Le Pierre des Communes, Le Piquante Pierre and the memorial of Le Croix des Moinats. Its historical industries were textiles, sawmills and granite.
Situated in fairly mountainous country, the Basse-sur-le-Rupt is laid out over approximately 10 kilometres along the départementale 34 which links Vagney with La Bresse, rising from 409 to 1060m in altitude. The commune's seven hamlets are