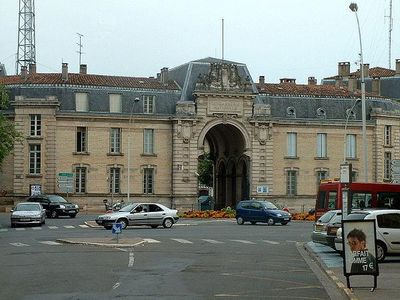 Albi is a commune in southern France. It is the prefecture of the Tarn department, on the River Tarn, 85 km northeast of Toulouse. Its inhabitants are called Albigensians , Occitan: albigés -esa). It is the seat of the Archbishop of Albi. The episcopal city, around the Cathedral Sainte-Cécile, was added to the UNESCO list of World Heritage Sites in 2010.
The first human settlement in Albi was in the Bronze Age . After the Roman conquest of Gaul in 51 BC, the town became Civitas Albigensium, the territory of the Albigeois, Albiga. Archaeological digs have not revealed any traces of Roman buildings, which seems to indicate that Albi was a modest Roman settlement.