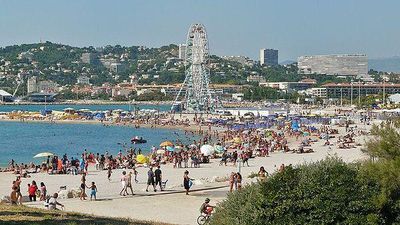 Marseille , locally [maχˈsɛjə] ; Occitan: Marselha [maʀˈsejɔ, -ˈsijɔ]) is the prefecture of the department of Bouches-du-Rhône and region of Provence-Alpes-Côte d'Azur in France. It is located on the Mediterranean coast near the mouth of the Rhône. Marseille is the second largest city in France, covering an area of 241 km2 and had a population of 870,018 in 2016. Its metropolitan area, which extends over 3,174 km2 is the third-largest in France after those of Paris and Lyon, with a population of 1,760,653 as of 2017, or 3,100,329 by the broader Eurostat definition of metropolitan region. Its inhabitants are called Marseillais.

One of Europe's oldest cities, founded around 600 BC and known to the ancient Greeks as Massalia and Romans as Massilia. Marseille has been a trading port since ancient times. In particular, it experienced a considerable commercial boom during the colonial period and especially during the 19th century, becoming a prosperous industrial and trading city. Nowadays the Old Port still lies at the heart of the city where the manufacturing of soap, its famous savonne de Marseille, began some 6 centuries ago. Overlooking the port is the Basilica of Notre-Dame-de-la-Garde or "Bonne-mère" for the people of Marseille, a Romano-Byzantine church and the symbol of the city. Inherited from this past, the Grand Port Maritime de Marseille and the maritime economy are major poles of regional and national activity and Marseille remains the first French port, the second Mediterranean port and the fifth European port. Since its origins, Marseille's openness to the Mediterranean Sea has made it a cosmopolitan city marked by cultural and economic exchanges with Southern Europe, the Middle East, North Africa and Asia. In Europe, the city has the third largest Jewish community after London and Paris.