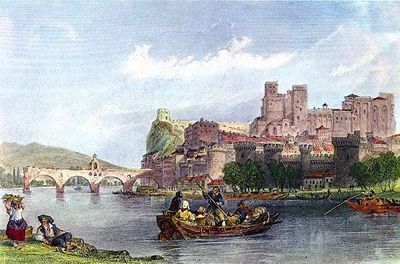 Avignon ; Provençal: Avinhon or Avignoun , IPA: [aviˈɲun]; Latin: Avenio) is the prefecture of the Vaucluse department in the Provence-Alpes-Côte d'Azur region of Southeastern France. Located on the left bank of the river Rhône, the commune had a population of 93,671 as of the census results of 2017, with about 16,000 living in the ancient town centre enclosed by its medieval ramparts.

Between 1309 and 1377, during the Avignon Papacy, seven successive popes resided in Avignon and in 1348 Pope Clement VI bought the town from Joanna I of Naples. Papal control persisted until 1791 when, during the French Revolution, it became part of France. The town is now the capital of the Vaucluse department and one of the few French cities to have preserved its ramparts.