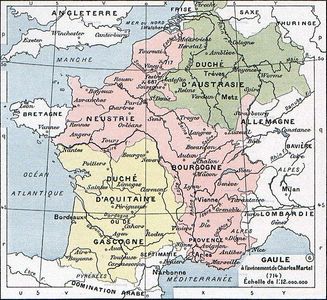 The Battle of Soissons of 718 was the last of the great pitched battles of the civil war between the heirs of Pepin of Heristal. Since Pepin's death in December 714, his grandson and heir Theudoald, his widow Plectrude, his bastard son Charles Martel, his successor as mayor of the palace in Neustria Ragenfrid, and the new king Chilperic II had been waging a war for ascendancy. Though Ragenfrid and Chilperic had begun with successes and Plectrude and Theudoald were removed early, Martel turned the tide of war and eventually forced the surrender of all his opponents.

After their defeat at the Battle of Vincy, Chilperic and Ragenfrid allied with Odo the Great, the independent duke of Aquitaine, and marched on Soissons. Unfortunately, Charles had anticipated this, and was awaiting them, with an ever better trained core of veterans, many of whom would serve him all their adult lives. That army easily defeated the allied forces of Odo, Chilperic and Ragenfrid near Soissons. The king fled with his ducal ally to the land south of the Loire and Ragenfrid fled to Angers. Soon Odo made peace and surrendered Chilperic to Charles and Ragenfrid made peace too. The war was over and Charles was undisputed dux Francorum.