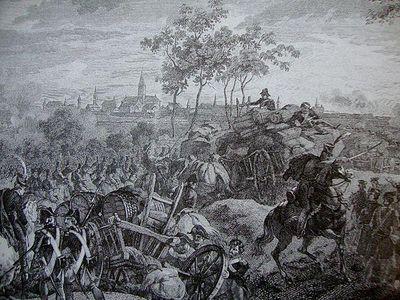 The Siege of Thionville was a conflict during the War of the First Coalition. It began at Thionville on 24 August 1792. A coalition force of 20,000 Austrians and 16,000 French Royalist troops under Frederick Louis, Prince of Hohenlohe-Ingelfingen failed to take the town, commanded by Georges Félix de Wimpffen, and raised the siege on 16 October. One of the French royalist troops was François-René de Chateaubriand, who was wounded in the battle. In the aftermath of the siege the National Convention declared that Thionville had "deserved well of the fatherland" - it named Place de Thionville and Rue de Thionville in Paris after the victory.