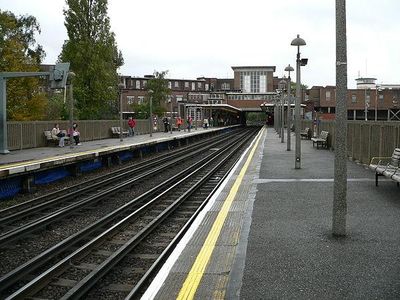 Rayners Lane is a London Underground station in the district of Rayners Lane in north west London, amid a 1930s development originally named Harrow Garden Village. The station is on the Uxbridge branch of both the Metropolitan line, between Eastcote and West Harrow stations, and the Piccadilly line, between Eastcote and South Harrow stations. The station is located to the west of the junction of Rayners Lane, Alexandra Avenue and Imperial Drive . It is in Travelcard Zone 5. Just east of the station, the Piccadilly and Metropolitan lines tracks join for services to Uxbridge and separate for those to Central London.

The Metropolitan Railway constructed the line between Harrow on the Hill and Uxbridge and commenced services on 4 July 1904 with, initially, Ruislip being the only intermediate stop. At first, services were operated by steam trains, but track electrification was completed in the subsequent months and electric trains began operating on 1 January 1905.