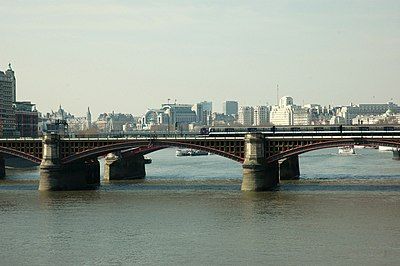 Blackfriars Railway Bridge is a railway bridge crossing the River Thames in London, between Blackfriars Bridge and the Millennium Bridge.
There have been two structures with the name. The first bridge was opened in 1864 and was designed by Joseph Cubitt for the London, Chatham and Dover Railway. Massive abutments at each end carried the railway's insignia, preserved and restored on the south side. Following the formation of the Southern Railway in 1924, inter-city and continental services were concentrated on Waterloo, and St Paul's Station became a local and suburban stop. For this reason, the use of the original bridge gradually declined. It eventually became too weak to support modern trains, and was therefore removed in 1985 – all that remains is a series of columns crossing the Thames and the southern abutment, which is a Grade II listed structure.