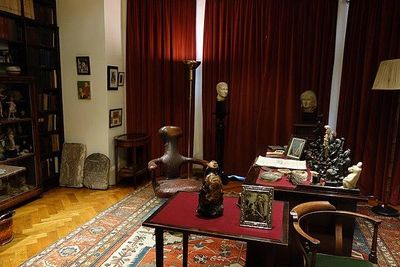 The Freud Museum in London is a museum dedicated to Sigmund Freud, located in the house where Freud lived with his family during the last year of his life. In 1938, after escaping Nazi annexation of Austria he came to London via Paris and stayed for a short while at 39 Elsworthy Road before moving to 20 Maresfield Gardens, where the museum is situated. Although he died a year later in the same house, his daughter Anna Freud continued to stay there until her death in 1982. It was her wish that after her death it be converted into a museum. It was opened to the public in July 1986.

Freud continued to work in London and it was here that he completed his 1939 book Moses and Monotheism. He also maintained his practice in this home and saw a number of his patients for analysis. The centrepiece of the museum is the couch brought from Berggasse 19, Vienna on which his patients were asked to say whatever came to their mind without consciously selecting information, named the free association technique by him.