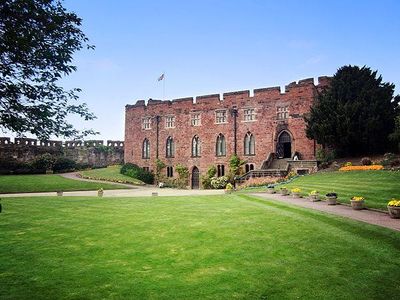 Shrewsbury Castle is a red sandstone castle in Shrewsbury, Shropshire, England. It stands on a hill in the neck of the meander of the River Severn on which the town originally developed. The castle, directly above Shrewsbury railway station, is a Grade I listed building.
A castle was ordered on the site by William I c. 1067 - a very early date - but it was greatly extended under Roger de Montgomery circa 1070 as a base for operations into Wales, an administrative centre and as a defensive fortification for the town, which was otherwise protected by the loop of the river. Town walls, of which little now remains, were later added to the defences, as a response to Welsh raids and radiated out from the castle and surrounded the town; the area known as Town Walls still has a small section of them and a single tower, known as Town Walls Tower, which is in the care of the National Trust). In 1138, King Stephen successfully besieged the castle held by William FitzAlan for the Empress Maud during the period known as The Anarchy.