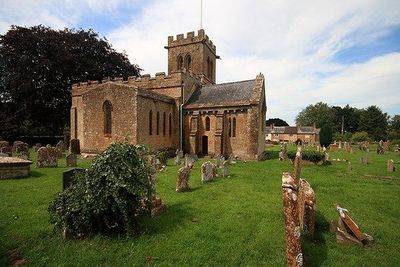 Stoke-sub-Hamdon , also known as Stoke under Ham, is a large village and civil parish in the South Somerset district of Somerset, England. It is situated 5 miles west of Yeovil, with which it is linked by the A3088 road. The parish is located near the River Parrett, and includes the village of East Stoke.

The village stretches around Ham Hill which is a geological Site of Special Scientific Interest , Iron Age hill fort, Roman site, and country park. The hill has given its name to the distinctive quarried hamstone which is quarried from a ridge of sandy limestone rock that is elevated above the lower lying clay vales and nearby Somerset Levels. It is of particular importance to geologists because of the assemblages of fossils which it contains, the sedimentary features which it displays and the way it relates to other rocks of equivalent age in the close vicinity. The Bronze Age and Iron Age hill fort was occupied by the Durotriges tribe. A Roman milestone was found at Venn Bridge in 1930: apparently it was made as an element in a colonnade and afterwards converted to a milestone inscribed with the name of the emperor Flavius Severus who ruled in 305-306 AD.