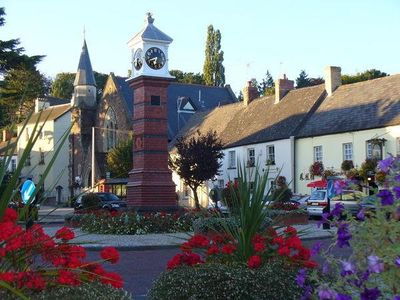 It is located on the River Usk, which is spanned by an arched stone bridge at the western entrance to the town. Usk Castle, above the town overlooks, the ancient crossing point. It developed as a small market town, with some industry including the making of Japanware, and with a notable prison built in 1841/2. In recent years Usk has become known for its history of success in Britain in Bloom competitions, winning the Large Village award in 2005. The resident population of the town in 2001 was 2,318, increasing to 2,834 at the 2011 census.
The origin of the Welsh name Brynbuga is less certain. The local Brythonic name adopted into Latin as Burrium or Burrio was recorded as Brunebegy and Burenbegie in the 15th century. The modern name is likely an example of the linguistic metathesis common in Welsh Topography. Folk etymology has suggested the name derives from Bryn Buga or Bryn Bugeilio .