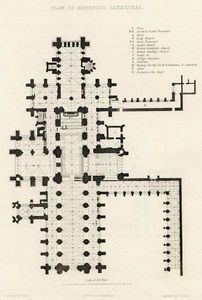 Hereford Cathedral is the cathedral church of the Anglican Diocese of Hereford in Hereford, England. Its most famous treasure is Mappa Mundi, a medieval map of the world created around 1300 by Richard of Holdingham. The map is listed on the UNESCO Memory of the World Register. The cathedral is a Grade I listed building. The site of the cathedral became a place of worship in the 8th century or earlier although the oldest part of the current building, the bishop's chapel, dates to the 11th century.
The cathedral is dedicated to two saints, St Mary the Virgin and St Ethelbert the King. The latter was beheaded by Offa, King of Mercia in the year 794. Offa had consented to give his daughter to Ethelbert in marriage: why he changed his mind and deprived him of his head historians do not know, although tradition is at no loss to supply him with an adequate motive. The execution, or murder, is said to have taken place at Sutton, four miles from Hereford, with Ethelbert's body brought to the site of the modern cathedral by 'a pious monk'. He was buried at the site of the cathedral. At Ethelbert's tomb miracles were said to have occurred, and in the next century Milfrid, a Mercian nobleman, was so moved by the tales of these marvels as to rebuild in stone the little church which stood there, and to dedicate it to the sainted king.