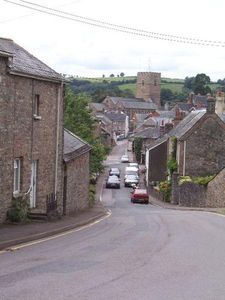 Bampton is a small town and parish in northeast Devon, England, on the River Batherm, a tributary of the River Exe. It is about 6 miles north of Tiverton, 19 miles north of Exeter and the parish borders Somerset on its north-east and north-west sides. Bampton is a major part of the electoral ward of Clare and Shuttern. The ward population at the 2011 Census was 3,412.
The history of Bampton is thought to have started with a Roman fort, but later Saxon remains are most easily seen. Some hedges conform to the Saxon furrow measure of 625 feet and traces of Saxon strip farming can be seen to the north-east of the later castle. The circular churchyard is also Saxon in origin.