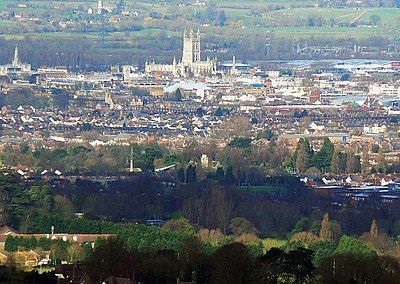 Gloucester ) is a city and district in southwest England, the county city of Gloucestershire. Gloucester lies close to the Welsh border, on the River Severn, between the Cotswolds to the east and the Forest of Dean to the southwest.
Gloucester was founded in AD 97 by the Romans under Emperor Nerva as Colonia Glevum Nervensis, and was granted its first charter in 1155 by King Henry II. Economically, the city is dominated by the service industries, and has a strong financial and business sector, and historically was prominent in the aerospace industry.