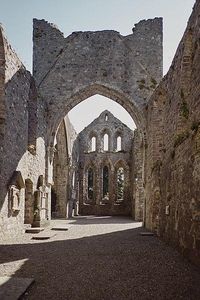 Grey Abbey is a ruined Cistercian priory in the village of Greyabbey, County Down, Northern Ireland, currently maintained by the Northern Ireland Environment Agency. It is a monument in state care in the townland of Rosemount, beside the Rosemount estate, on the eastern edge of the village of Greyabbey in the Ards and North Down local government district, at grid ref: J5829 6810.
Grey Abbey was founded in 1193, by John de Courcy's wife, Affreca , as a daughter house of Holmcultram Abbey in Cumbria. It had declined by the late Middle Ages and was dissolved in 1541. It was burnt out by Brian O'Neill in 1572. It was granted to Sir Hugh Montgomery who re-roofed the abbey in 1626 and refurbished it for use as a parish church. It was used until 1778.