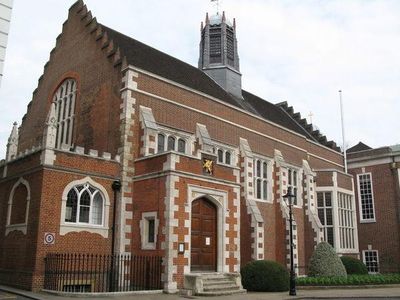 The Honourable Society of Gray's Inn, commonly known as Gray's Inn, is one of the four Inns of Court in London. To be Called to the Bar and practise as a barrister in England and Wales, an individual must belong to one of these Inns. Located at the intersection of High Holborn and Gray's Inn Road in Central London, the Inn is both a professional body and a provider of office accommodation for many barristers. It is ruled by a governing council called "Pension", made up of the Masters of the Bench , and led by the Treasurer, who is elected to serve a one-year term. The Inn is known for its gardens, or Walks, which have existed since at least 1597.
Gray's Inn does not claim a specific foundation date; there is a tradition that none of the Inns of Court claims to be any older than the others. Law clerks and their apprentices have been established on the present site since at least 1370, with records dating from 1381. During the 15th and 16th centuries, the Inn grew steadily with great prestige, reaching its pinnacle during the reign of Elizabeth I. The Inn was home to many important barristers and politicians, most notably Francis Bacon, and counted Elizabeth herself as a patron. Thanks to the efforts of prominent members such as William Cecil and Gilbert Gerard, Gray's Inn became the largest of the four by number, with over 200 barristers recorded as members. During this period, the Inn became noted for the masques and revels that it threw, and William Shakespeare is believed to have first performed the Comedy of Errors play there.