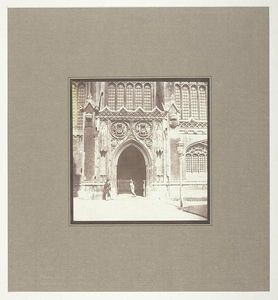 King's College Chapel is the chapel of King's College in the University of Cambridge. It is considered one of the finest examples of late Perpendicular Gothic English architecture. The Chapel was built in phases by a succession of kings of England from 1446 to 1515, a period which spanned the Wars of the Roses and three subsequent decades. The Chapel's large stained glass windows were completed by 1531, and its early Renaissance rood screen was erected in 1532–36. The Chapel is an active house of worship, and home of the King's College Choir. It is a landmark and a commonly used symbol of the city of Cambridge.
Henry VI planned a university counterpart to Eton College . The King decided the dimensions of the Chapel. Reginald Ely was most likely the architect and worked on the site since 1446. Two years earlier Reginald was charged with sourcing craftsmen for the Chapel's construction. He continued to work on the site until building was interrupted in 1461, having probably designed the elevations. The original plans called for lierne vaulting, and the piers of the choir were built to conform with them. Ultimately, a complex fan vault was constructed instead. Reginald probably designed the window tracery at the extreme east of the church's north side: the east window of the easternmost side chapel, which unlike the Perpendicular style of the others is in curvilinear Gothic style. The priest and later bishop Nicholas Close was recorded as the "surveyor", having been the curate of St John Zachary, a church demolished to make way for the Chapel.