RouteYou » Dromos » Places of interest » Valley of the Rocks 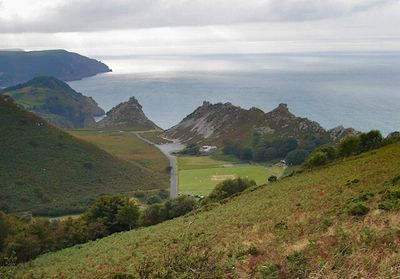 The Valley of the Rocks or The Valley of Rocks is a dry valley that runs parallel to the coast in north Devon. It is a popular tourist destination, noted for its herd of feral goats, and for its geology, having good exposures of the Lynton Beds that are among the oldest Devonian rocks in north Devon and are highly fossiliferous. Also of note are the periglacial features formed when this area was at the limit of glaciation during the last Ice Age. The valley is believed to owe its existence to the dissection by coastal cliff recession of a former extension of the valley of the East Lyn River which now meets the sea at Lynmouth.