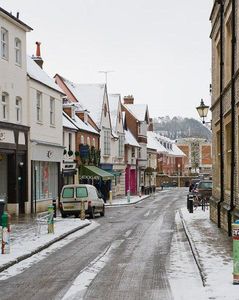 Winchester is a cathedral city in Hampshire, England. The city lies at the heart of the wider City of Winchester, a local government district, at the western end of the South Downs National Park, on the River Itchen. It is 60 miles south-west of London and 14 miles from Southampton, the closest other city. At the 2011 census, Winchester had a population of 45,184. The wider City of Winchester district, which includes towns such as Alresford and Bishop's Waltham, has a population of 116,595. Winchester is the county town of Hampshire and contains the head offices of Hampshire County Council.

Winchester was the first and former capital city of England. It developed from the Roman town of Venta Belgarum, which in turn developed from an Iron Age oppidum. Winchester remained the most important city in England until the Norman conquest in the eleventh century. The city has since become one of the most expensive and affluent areas in the United Kingdom.