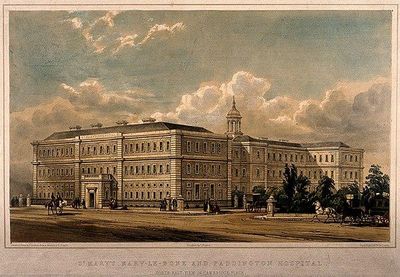 St Mary's Hospital is an NHS hospital in Paddington, in the City of Westminster, London, founded in 1845. Since the UK's first academic health science centre was created in 2008, it has been operated by Imperial College Healthcare NHS Trust, which also operates Charing Cross Hospital, Hammersmith Hospital, Queen Charlotte's and Chelsea Hospital and the Western Eye Hospital.
Until 1988 the hospital ran St Mary's Hospital Medical School, part of the federal University of London. In 1988 it merged with Imperial College London, and then with Charing Cross and Westminster Medical School in 1997 to form Imperial College School of Medicine. In 2007 Imperial College became an independent institution when it withdrew from the University of London.