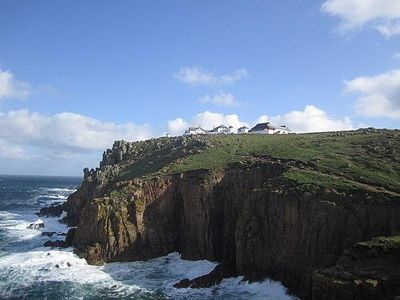 Land's End is a headland and holiday complex in western Cornwall, England. It is the most westerly point of mainland Cornwall and England, situated within the Penwith peninsula about eight miles west-south-west of Penzance at the western end of the A30 road.
The actual Land’s End or Peal Point, is a modest headland compared with nearby headlands such as Pedn-men-dhu overlooking Sennen Cove and Pordenack, to the south. The present hotel and tourist complex is at Carn Kez, 200 m south of the actual Land’s End. Land's End has a particular resonance because it is often used to suggest distance. Land's End to John o' Groats in Scotland is a distance of 838 miles by road and this Land's End to John o' Groats distance is often used to define charitable events such as end-to-end walks and races in the UK. Land's End to the northernmost point of England is a distance of 556 miles by road.